First on our agenda was Touch & Go – a dancing game of cause and effect, carefully created for this curious and hands-on age group. Touch & Go is dedicated to the mighty two year old, inviting them to enter a special world with two friendly dancers, shapes, pathways and live music. Interspersed with playful enticements to become part of the performance, children are free to take part or observe, venture out or stay close, Miss P being the dancing queen loved every minute of the experience and got in the swing of things from the very start.

After a quick lunch it was then off to Tai Chi – which was a big hit with Piper. Through play, children exercise their motor coordination and learn about interaction with others. Tai Chi makes great use of the children’s imagination and the workshop takes cues from classic stories from Chinese folklore and cultural history.

Back again the next day we made our way to the cultural forecourt for some baby yoga – An interactive parent-baby workshop experience, we learnt some unique yoga sequences designed to improve baby’s development, using movement and songs to enhance learning. Piper loved this and it was fantastic to see how quickly she picked it up and it was all we heard about on the way home. 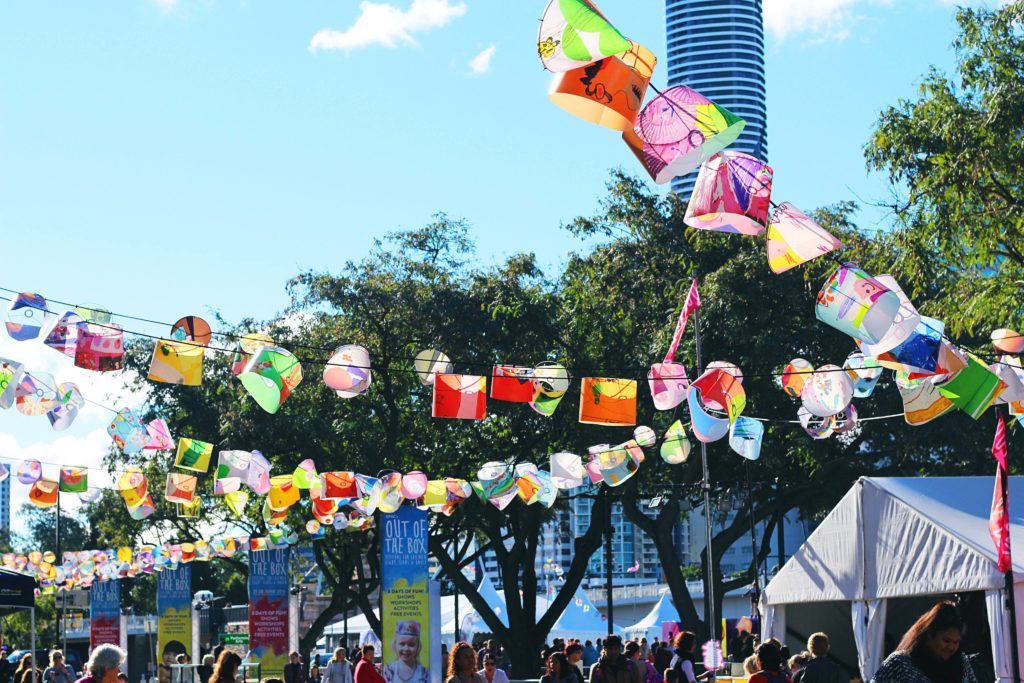 We finished the day checking out all the free activities that were available and by afternoon I was taking home lots of craft and one very happy toddler who slept well all the way home.

As I said, this was our first OUT OF THE BOX festival but now that we’ve attended and participated in this one, we’ll certainly be looking forward to and planning for next year. Just so much to do and see make sure you visit you wont be disappointed.

A very big Thank You to the organizers at QPAC for a couple of fab days out.

With much anticipation and excitement Piper and I are awaiting June as we are headed to the OUT OF THE BOX festival  for children 8 years and under at the Queensland Performing Arts Centre (QPAC) in Brisbane. This longstanding biennial event is a highlight on Brisbane’s cultural calendar for both schools and families alike.

This was the first time we will be attending the festival, which has been held since 1992.

We are ready and waiting to see and be involved in the CREATIVE CREATURES, KIDS’ THINK TANK, RAIN, SNOW AND A GAZILLION BUBBLES!

We will also be participating in the Wellness Workshops which are designed to connect the mind and body through the principles of movement, stillness and mindfulness, and educate about the origins of these art forms seen so strongly in many Asian cultures and spirituality. The workshops include children’s yoga, mum-and-baby yoga, tai chi, Kung-Fu, and meditation. These art forms have been around for centuries, and have proven long-term health benefits and we cant wait to get involved!

This event is Perfect for the little ones helping them explor and learn through numerous creatively designed activities and plays to enhance learning and discovery.

Taking place 21 – 28 June 2016 at QPAC and across the Cultural Precinct and South Bank, Brisbane, Out of the Box provides a rich arts-based program for both schools and the general public. This year’s Festival crosses over the end of theschool term and into the June school holidays.

Out of the Box has been curated by QPAC for 24 years and is the only arts festival in Australia dedicated to children 8 and under and one of only a few in the world. It’s also the nation’s largest early childhood arts festival and had more than 103,000 participants in the 2014 festival.

We hope to see you there!

OUT OF THE BOX FESTIVAL FOR CHILDREN EIGHT YEARS AND UNDER